Welcome to the website for Suzzanne Douglas. Here you will find and discover the musical side of a woman who Rolling Stone Magazine dubbed as "fabulous." Sign up for Suzzanne's mailing list and stay connected to the lady and her music.

I am delighted to share that my band Voba and I are the recipients of a Chamber Music of America’s Performance PLUS grant for 2021-22, funded through the generosity of the Doris Duke Charitable Foundation, The program, which supports U.S.based female-led jazz ensembles by connecting them with an experienced jazz artist-educator for six evaluative listening sessions with the goal of enhancing the ensemble’s performance.

Suzzanne on "Greatest Sounds Under the Sun" with Sir Bruce

Check out Suzzanne's fabulous interview with Sir Bruce Jefferson on WESU Radio!  Sir Bruce told us that "...(the) listening audience has rated my interview with Ms Douglas as the highest rated interview in the stations history. WOW!  She is so smart, funny, and educated."

Suzzanne calls in about an hour into the broadcast:

"Meant to Be" Now Available for Purchase!

"Meant to Be" can now be purchased in our online STORE - this was written as an anti-hazing song for Delta Sigma Theta Sorority's 1st ever Anti Hazing Summit and  a portion of the proceeds will go to the organization's efforts to end hazing.   Let's  S.T.O.P. and end hazing together.

Happy to announce that the official music video for my film Happy Yummy Chicken is here. Click HERE to see it.

Watch out for the release of the music video for Happy Yummy Chicken. Acting with Taryn Manning from "Orange is the New Black," was great!
She's loads of fun!!! Happy Yummy Chicken is a mocumetary that takes a look a the theater industry. I was honored when the producers asked me to pen the title song. It's a fun and silly ditty. Click HERE for the preview track. Thanks also to Ruby Choi for contributing her vocal skills to the track.

Looking forward to my music video shoot with my band at Oktaven Studios in May.
Look for the first video clips on my video page shortly after the shoot.

The program also features interactive activities, exercises and self-care strategies from experts Dr. Carol Penn and Rev. Dr. Stefanie R. Minatee. A special message about Dean Jewel Plummer Cobb’s legacy will be presented by her son Jonathan Cobb and daughter-in-law, actress Suzzanne Douglas. Due to the impact of COVID-19, the Sisters Conference has been modified and condensed for this year. Chair Dorothy Clay ‘77 and the entire committee invites all alumnae and friends to participate.

REGISTER AT THE LINK BELOW! 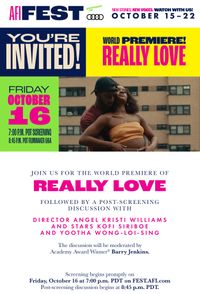 About the Film: Set in a gentrifying Washington, DC, a rising Black artist, Isaiah (Kofi Siriboe), spends most of his days pouring his heart into his paintings but still struggles to find his place in the prestigious and competitive art world. At a gallery show, Stevie (Yootha Wong-Loi-Sing), an impressive and intelligent law student, catches his eye. A chance encounter is one thing, but the stars align and they meet again, leading to a whirlwind romance. When both Isaiah and Stevie hit crossroads in their careers, they are forced to consider if their relationship is a love for a season or a love for a lifetime.

The Alliance is proud to partner with the John F. Kennedy Center for the Performing Arts for the live-streamed video series, Arts Across America. Four New Jersey artists connected with theatres from the membership of New Jersey Theatre Alliance will be featured. Suzzanne Douglas, an actor and singer representing Crossroads Theatre Company in New Brunswick, will perform music and spoken word poetry accompanied by a live bass player.

Playwright Tylie Shider, representing The Theater Project in Union, will share excerpts of his new play, The Sign in My Window, a piece he wrote during the aftermath of George Floyd’s death, about cosmopolitan-neighbors who discover they have dissenting opinions about how to protect their homes during an uprising.

Lewis Merkin, composer and performer, will collaborate with a young artist to share a duet from A Thousand Faces, a song between a deaf father and his hearing son, written for a deaf performer. The development and production of A Thousand Faces at Skyline Theatre Company in Fair Lawn was awarded a 2019 Innovator Award from the Cultural Access Network Project, a partnership between New Jersey State Council on the Arts and the New Jersey Theatre Alliance. 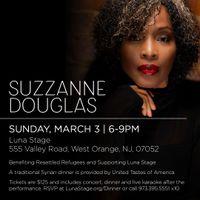 Luna Stage and the United Tastes of America are hosting a memorable evening of entertainment and conversation while experiencing the tastes of traditional Syrian dishes. Musical performance by jazz vocalist, composer and award-winning actor Suzzanne Douglas and her quartet. 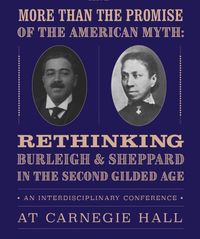 Concert and Conference to Explore Intersection of Power, Race, and Virtuosity in America on March 2-3 at Carnegie Hall

"I am honored to have been invited to be a panelist for the Harry T. Burleigh Society where I will share the legacy of my uncle Bob Cole. The conference will explore race, power and their interaction with virtuosity in America." Suzzanne Douglas Tickets are free and open to the public https://www.burleighsociety.com/ 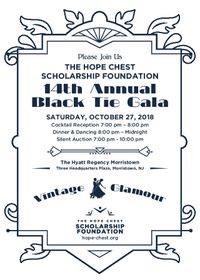 Jazz vocalist, composer, and award winning actress Suzzanne Douglas celebrates the jazz greats Parker and Monk with new arrangements and original compositions. With her selection of Broadway show tunes that have since become legendary jazz standards, Ms. Douglas is “a marvel of grace and alluring jazz vocal stylings that bring to mind the late, great Lena Horne” (Chicago Daily Herald). Ms. Douglas will be accompanied by her band during the cocktail reception for this prestigious fundraising event.

Jazz vocalist, composer, and award winning actress Suzzanne Douglas celebrates the jazz greats Parker and Monk with new arrangements and original compositions. With her selection of Broadway show tunes that have since become legendary jazz standards, Ms. Douglas is “a marvel of grace and alluring jazz vocal stylings that bring to mind the late, great Lena Horne” (Chicago Daily Herald). Having recently completed principal photography on the feature film Really Love, and performances as Dorothy Bock in 42nd Street, Ms. Douglas will be accompanied by her band and a special guest, as she moves from the stage to the mic for an evening of music and celebration. 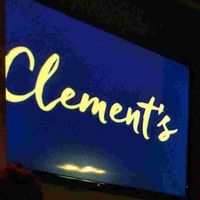 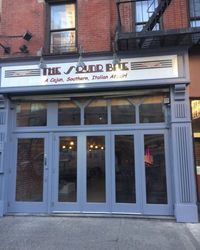 Sunday, June 10, 2018 3:00 to 5:30pm Ice Cream Social with a Special Performance by Suzzanne Douglas This event is open to CGSCC cancer survivors and their caregivers. Free parking available across from the Carol G. Simon Cancer Center entrance Seating is Limited – RSVP Required Call 1-800-247-9580 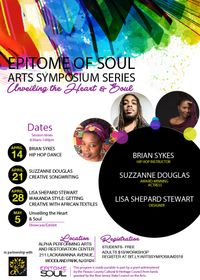 Jazz Brunch at Alvin and Friends

Suzzanne will be performing at the Association of Performing Arts Professionals annual conference in New York City. 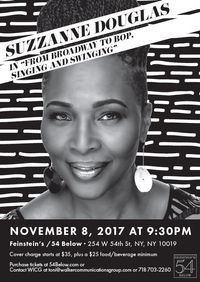 Suzzanne Douglas makes her Feinstein's/54 Below debut in “From Broadway to Bop; Singing and Swinging”. Suzzanne's jazz inspired arrangements on standards like "My Favorite Things" and "I Loves You Porgy", will show you a different side to these well-known songs. Come hear Suzzanne and her special guests perform the iconic Broadway tunes that have become jazz standards. 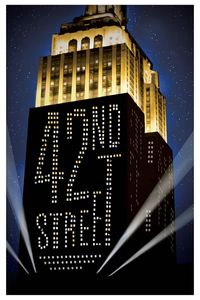 Tap through this year’s holiday season with the Tony Award winner for Best Musical, 42nd Street! In this beloved Broadway classic, Peggy Sawyer lands a bigger break in New York City than expected. When the leading lady injures her ankle, Peggy gets the chance of a lifetime to rise from showgirl to star. With showstopping tap numbers and hits such as “We’re In The Money” and “Lullaby of Broadway,” there’s no question that 42nd Street will dazzle you this winter at Drury Lane Theatre. Box Office: +1 (630) 530-0111 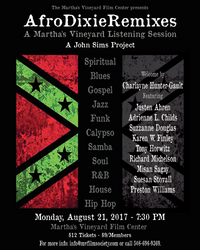 Multi-media artist and producer John Sims will be coming to the Martha’s Vineyard Film Center to present The AfroDixieRemixes: Martha’s Vineyard Session, August 21, 2017, at 7:30 PM. This listening session presents the song Dixie - the de-facto anthem of the Confederacy, as you have never heard it before- by way of the many genres of black music. $12 Tickets - $9/Members For more information: info@mvfilmsociety.com or call 508-696-9369 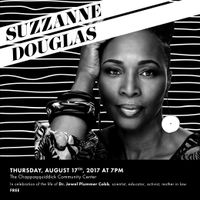 A collection of Jazz standards and original compositions performed to honor the legacy of Dr. Jewel Plummer Cobb, scientist, educator, advocate. Light refreshments will be served. Admission is Free. 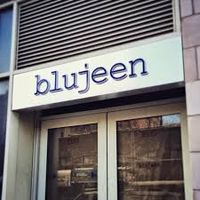 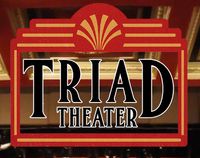 Suzzanne Douglas shares an evening of re-imagined jazz standards and her original compositions. Accompanied by Can Olgun on piano, Desmond White on bass and Jake Robinson on drums, Suzzanne celebrates jazz - the music of America. Please note: Tickets are $20 and The Triad has a 2-drink minimum.